Oh, I just threw this out there because it was sort of a frustrating night: 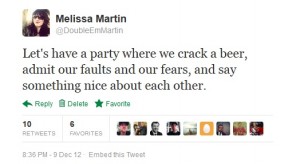 Although thoroughly unplanned, it went over very well.

For all of those that joined in, we had a lot of good Tweets, and said many nice things, and even knew we meant them. We met a lot of cool people. We spun off into tears about parenting and fears, and social anxiety and mental health and all the things that twist the face we rarely, if ever, put out before the world.

My hope in this wasn’t quite therapy, because there’s no Tweet that’s going to fix what’s wrong (or just what’s scary) in any given life. There was just this: after another night of beating myself up over things I did or said or didn’t do, or am afraid I did without meaning to or otherwise just somehow screwed, I remembered something my dad told me, a long time ago.

“Dad, is anything in psychology universal?”

“Well,” he says, and pauses. “Everyone is afraid. And everyone wants to be heard.”

Writing, for me, has always been a way to bridge the solitude, the peculiar state of together and alone to which humans are so uniquely heir.

This week was an anniversary of sorts, though one that’s bittersweet and not quite something I can put out for the public to consume. Let’s just say it’s been two years since some stuff happened and my life went headed somewhere new. But it all goes back to this: by a certain age, almost everyone is walking wounded.

It could be sort of beautiful, if we allowed that to unite.

So here’s me, right: I’m socially awkward at the best of times. I try to paint a face of confidence, but worry that it comes across all wrong. My tongue is usually tied but my fingers can always find the words it meant to say, so in the dying hours of most every day I find myself wanting to write letters. “Forget what I said, imagine me saying this instead,” or, more simply: hey, can I get a re-do?

…and because, sometimes, I’m insecure.

…and sometimes, more than just a little bit afraid.

There are no reset buttons in life, and sometimes you know you have no more chances to explain. But life’s not even close to complicated. It’s just imaginary mazes that make it feel that way.

The point is this: everyone is at least a little broken, and my friends, that is completely fine.

There is a strange silence around this part of being human: act like this, don’t act like this. Don’t let her see you’re sad. Don’t tell him that you’re scared. Pray they don’t realize you’re doing this because you’re trying to be liked. Or pray they don’t see how you’re doing this just to push them all away. Most of all, whatever you do, show no faults and no insecurities: you can’t let anyone see you that way.

Because wouldn’t that just be the worst?

From the silence grows social politics, a dance of all our different masks. Each makes a statement in its own way, and sometimes they’re even beautiful. The masks make life interesting and intense and worthy of the living. But they also force us to guess what really moves behind the faces we’re searching: in or out? Accepted? Welcomed? Even — dare we say it — loved?

Sometimes, it’s just nice to take a breather, and say, “well, this is me, and I’m okay.”

Usually, we fill this silence with music, we just pump it right full of art. We answer it in the peculiar shoulder-to-shoulder way that we engage everything that strikes the heart. You know, like how that Gotye song comes on the radio, and we squeal, and make fun of it — but only so we don’t have to slam our fists against the wheel. This video nailed it well.

Come on man, everyone has that somebody that they used to know. So why worry so much about letting war wounds show?

I’ve written in the past about working through depression, and body image issues, and all sorts of other bits and pieces that sometimes make life feel a little suck. I’ve been told that I should stop doing this immediately: “But what will people think of you?” seems to be the popular refrain.

Well, see, the thing is — I’d hope they see that I am fine, neither perfect nor ashamed. Just living, and figuring that out a little bit further every day.

Whatever it is that eats at you, I hope you feel the same. We’re all a little broken. And that’s totally okay.

Long story short: thanks to all who participated tonight. Wherever you came from and however our paths ever (or never again) meet, it was sort of awesome and perfect and perfectly human to wallow in an hour of simple positivity.

You’re all just great, whatever your flaws may be. If anyone takes issue with that? You tell ‘em to come have a word with me.